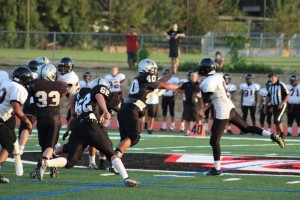 The Clark freshman football team opened their season with two narrow losses to the Churchill Chargers last Friday.  The A team kicked things off for the Cougars, taking the lead on an Eric Wente run early in the 2nd quarter, followed by Truett Heintzelman carrying in the two point conversion to go ahead 8-0. The Chargers responded just before halftime when they found an hole in the Cougar secondary, throwing for a 10 yard touchdown.  A circus throw and catch added 2 points to the Chargers total as they succeeded in the subsequent conversion, making it 8-8 going into the second half.

Both teams struggled to get into rhythm in the second half.  Churchill’s defense forced a fumble on the Cougar’s 44 yd line, but on the following play, Cougar defensive tackle Miguel De La Rosa single-handedly tackled the Churchill running back for a 5 yard loss.  A swarming defensive effort forced the Chargers to punt once again, but the punt was mishandled and Churchill recovered deep in Cougar territory.  The Cougar defense held once again, giving the ball back to the offense after batting down a 4th down pass attempt in the endzone.  Clark couldn’t get any offensive traction on the following series, and had to punt the ball away.  Midway through the fourth quarter, Churchill’s running back found a crease in the Cougar defense and scampered in for a 20 yard score, and converted their two point conversion to take a 16-8 lead. Not to be outdone, the Cougars scored on their third play of the ensuing drive when Heintzelman pitched to Wente on the option, and Wente scampered 70 yards, breaking four tackles on his way to the endzone to make the score 16-14 Churchill.  Jakub Rayfield was unable to haul in Heintzelman’s toss for the two point conversion, so the score remained.  On the following drive the Charger offense was able to get a first down, which enabled them to use the remainder of the time left in the game, sealing the victory.

The freshman B team game was nearly a mirror image of the A team game.  After holding Churchill’s initial drive, the Cougar offense put the ball on the ground during a handoff, but the Cougar defense got the offense back on the field after a Sebastian Torres interception in Cougar territory. The Cougars struggled to move the ball on the ensuing drive, but the defense held tough once again forcing a turnover on downs.  Quarterback Max Arguello managed to give the Cougars a little breathing room with his 26 yard toss to Josh Cervantes who was well behind the Charger defense. Solid running by RB Josh Morales, and an impressive scamper by Arguello had the Cougars knocking on the door, but a second miscue on the handoff resulted in a Cougar turnover. The swarming Cougar defense forced the Chargers to go three and out, but on the punt, a Cougar defender got a piece of the punter, which resulted in a penalty and a second chance for the Chargers. The following play, Churchill took advantage of the opportunity and found a receiver down the sideline who raced in for a Charger touchdown as time expired in the half.  The Cougars prevented a 2 point conversion attempt to leave it 6-0 Churchill at half.

After the second half kickoff, Arguello, on the second play from scrimmage, showed nifty footwork as he scrambled and danced down the sideline for a 75 yard run, finally being brought down at the Churchill 4 yard line. The following play Arguello pitched the option to Morales, who was able to race around the edge and into the endzone to put the Cougars on the board early in the 3rd. Clark failed to convert and the score stood 6-6.  On the following Churchill drive corner Josh Morales recovered a loose ball after a long Churchill completion.  The two teams battled back and forth until a Churchill punt hit an unsuspecting Clark defender, and Churchill recovered in Cougar territory.  Churchill capitalized on their good fortune on the following play, hitting a Charger receiver deep for a 45 yard catch and run to make it 12-6.  A toss and catch on the 2 point conversion gave the Chargers an 8 point lead late in the 4th quarter.  Arguello connected with Cervantes again on a 24 yard toss on 4th and long to save the following drive.  Cougar running back Ryan Ramirez powered through Churchill defenders to help move the Cougar’s further into Churchill territory, setting up Arguello, who once again worked his magic, scrambling out of the pocket and sprinting around the left side of the Churchill defense for a 25 yard touchdown run.  The Cougars couldn’t convert and the score stood at 14-12 Churchill. The Cougars had one last chance after an errant snap and subsequent turnover on downs gave the Cougars the ball at the Churchill 15 yard line.  Ramirez carried defenders into the endzone on the following play for what appeared to be the go-ahead touchdown with under a minute remaining, but a holding penalty negated the score and moved the Cougars back to the Churchill 23 yard line.  The Cougars valiantly fought to find the endzone again, but were stopped short on downs, and Churchill was able to kneel and end the game ahead, 14-12.

We’re proud of both teams, and we’re looking forward to taking on Roosevelt this Friday, September 2nd at Clark high school.