The Clark freshman football team played host to the Roosevelt Roughriders last Friday after a lengthy lightening delay and plenty of rain.  Action began with both schools’ A teams squaring off first.  Field conditions were less than desirable, and the Cougars had trouble getting anything going early on.  On the opening kickoff the Cougars committed their first turnover as a host of Roughriders bottled up the returner and popped the ball loose.  Roosevelt took quick advantage of the turnover and the short field on their initial drive, scoring their first touchdown minutes into the contest.  Clark was able to maintain possession on the following kickoff, but the wet conditions contributed to another turnover on their first offensive drive, giving the Roughriders another short field.  The Cougar defense struggled to contain Roosevelt’s running back, and a few plays later Roosevelt found the end zone again.  With the two point conversion the Roughriders jumped ahead 14-0 early in the first quarter.  Clark’s offensive and defensive struggles continued on the next set of drives and the Cougars found themselves in a 22-0 hole still in the first quarter.  Clark was finally able to sustain a drive and find pay-dirt on a pass from quarterback Truett Heintzelman to wide receiver Jakub Rayfield.  Clark was unsuccessful on their 2 point conversion, but had gotten on the board to make the score 22-6 at the end of the first.  Unfortunately the Cougars were unable to maintain the momentum, and Roosevelt managed two more scores before Clark was able to find the end zone again just before time expired in the fourth quarter on a tough run by running back Eric Wente.  The Cougars were unable to convert, and the final score stood 35-12.  The Cougar A team fell to 0-2 with the loss, but look to turn it around Thursday when they play Lee high school at Lee, Thursday at 4:30.

The Cougar freshman B team rebounded well from their close loss to Churchill a week prior.  The Cougar offense took the initial kickoff and drove down the field methodically, capping off the drive with quarterback Max Arguello finding the end zone with his feet to get on the board 6-0.  On the following kickoff, Nick Connaughton covered up a Roosevelt fumble to give the Cougars possession again.  Clark was drew blood again after pounding the ball down the field when running back Tre Byrd capped off the drive with a short run over the right side of the Cougar offensive line.  Cougar back Ignacio Pena followed suit on the 2 point conversion to give the Cougars a 14-0 lead just before halftime.  As the game went on, field conditions worsened, and Clark’s offense struggled to maintain the traction they had in the first half, but aggressive defensive play kept the Roughriders off the board, and the Cougars came away victorious, and with their first shut-out of the season, 14-0.  The win puts the Cougar B team at 1-1, and they look to continue their winning ways when they take on Lee high school at 6:00 on Thursday, at Lee high school. 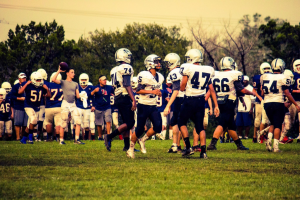 We appreciate all of the support and look forward to seeing you support the Cougar freshman this season.