On Friday September 30th the Clark freshman played host to the Stevens Falcons in the first zone contest of the year.  Both teams played hard fought games versus a talented Stevens freshman squad, with the A team shutting out the Falcons 14-0, and the B team narrowly losing a heartbreaker, 16-14.

The first game began with the Cougars kicking to the Falcons.  Clark managed to force the Falcons into an early fourth and short situation, but were drawn off-sides on a hard count by the offense, giving the Falcons a first down near midfield.  Two plays later, Cougar defensive end Ted Rodriguez capitalized on a botched snap by jumping on the loose ball, giving Clark possession in Falcon territory.  A running back screen pass from Heintzelman to Wente allowed the Cougs to convert on third down.  Three plays later, facing another third down, Heintzelman threw short to receiver Jakub Rayfield who quickly pitched the ball to Wente as he ran out of the backfield.  Wente took the pitch and raced down the right sideline 27 yards for the first score of the game.  The point after attempt was good, and the Cougars led Stevens 7-0 early in the first quarter.

Stevens following offensive series was short lived after linebacker Jared Smith sacked the Stevens quarterback on third and three, forcing the Falcons to punt.  The Cougar offense struggled on their second drive as well, going three and out.  The Falcons’ offensive woes continued on the following series, thanks in part to great play by cornerback Geremy Gutierrez, who had a timely pass break-up on the drive, forcing Stevens to punt once again.  Clark’s continued to struggle against a quick Stevens defense, and after three plays lined up to punt.  Heintzelman, who also punts for the Cougars, received the ball from long-snapper Blake Hooker and sprinted around the right side of the formation following blocks from his shield wall (Max Guerrero, Ted Rodriguez and Gio Silva) and carried the ball well past the line to gain resulting in a new set of downs.  Three plays later, facing another third and long, Heintzelman hit Rayfield on a tunnel screen which he carried for another drive-saving first down.  The Stevens defense was able to stiffen up near their own red-zone however, and on fourth and short, the Cougars failed to convert, and the Falcons got the ball back on downs with seconds remaining in the half.

The Cougars received the kickoff from Stevens after halftime, but a few plays into their first drive Clark lost a fumble on an errant pitch from Heintzelman to Wente on the option.  Stevens recovered in Cougar territory, but another bad exchange between the Falcons’ center and quarterback had the ball loose on the turf once again.  Wente scooped up the ball from his safety position, after nose-guard Trent Duckworth blew up the Stevens quarterback as he tried to pick up the loose ball, knocking the ball loose once again, and took it 70 yards the other direction for a defensive touchdown.  The point after was good, and Clark took a 14-0 lead with 5:00 left in the third quarter.  Stevens managed to move the ball on the Cougars on their following drive, utilizing a fake punt of their own to get them out of a fourth and long, but before the Falcons could get into the red-zone, Rayfield stepped in front of a Stevens receiver and picked the ball off.

The Cougar offense managed to put together a long drive, eating up clock and advancing the ball down to the Falcon 10 yard line, but the drive stalled and Stevens sent their offense back on the field with just over two minutes remaining in the game.  On their second play from scrimmage Stevens looked to throw downfield, but corner Gutierrez picked the ball, giving Clark’s offense the ball with 1:50 left on the clock.  The Cougars were knocking on the door once again when time expired.  With the win, the A team moves to 4-2, and 1-0 in zone play.  They will play John Jay Friday, October 7th at Jay high school at 4:30 pm.

The freshman B team sent their kickoff team out to begin the game, and after the Falcons offense sputtered and were forced to punt, the Cougar offense took the field. The Cougars managed minimal yards, unable to move the ball against a stiff Falcon defense, and Clark was forced to punt. 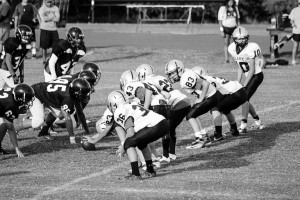 The Stevens offense met similar resistance in the form of a swarming Cougar defense, forcing the Falcons to punt again.  The Cougars still failed to gain any traction offensively, and after three plays punted the ball away to the Falcons once again.  This time the Falcon offense capitalized on their opportunity, punching the ball into the end-zone in four plays.  The Falcons converted their two point conversion to take the lead 8-0 with 1:13 remaining in the first half of play.  Clark took the following kickoff back 50 yards, to the Stevens 35 yard line, where they took over on offense.  Running back Ryan Ramirez took the first hand-off up the middle and down to the Falcon 13 yard line.  Ramirez second run went for no gain.  With little time remaining, quarterback Arguello kept the ball on the zone read and took it around the left side of the offense, and down to the five yard line, but the gain was negated on a holding penalty.  Two plays later Arguello grabbed a high snap and scrambled right, avoided a couple tacklers, and raced into the endzone as time expired in the half to make it 8-6.  Arguello kept the ball on the option play for the two point-conversion, and bulled his way across the goal line to convert, tying the game 8-8 going into halftime.

The Cougars received the kick after half, and the offense took over.  Running back Cesar Alderete found room on the right side of the offensive line for a good gain, but on the following play, a blitzing Falcon hit running back Tyrese Rayford in the backfield as he received the handoff, forcing the Cougars into a third and long situation.  Receiver Sebastian Mejia came up big, snagging Arguello’s pass behind the Falcon defense, and he was finally caught on the Falcon 40 yard line.  Two plays later, Arguello found Mejia behind the defense once again for a 40 yard touchdown strike. The two-point conversion failed, but the Cougars had the lead 14-0 with 3:30 remaining in the third quarter. 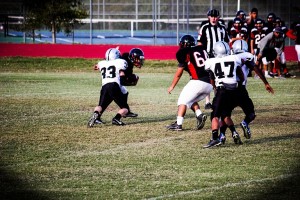 The Falcons were forced to punt on their following offensive series, but on the first play from scrimmage, Cougar back Rayford lost the ball while fighting for yards, but lineman Rayden Davila managed to cover it up for a loss.  The following play the Cougars weren’t so lucky.  Ramirez was hit during the exchange, and once again the ball was on the turf, this time it was a Falcon defender who came up with it.  Six plays later, the Falcons found paydirt on the inside run by the running back, and a quarterback scramble on the two-point conversion found the Falcons once again in the lead, 16-14 with 5:35 left in the game.  The Cougars got minimal yards on the kickoff return, but a fortuitous pass interference call on what appeared to be an interception moved the Cougars’ offense 15 yards closer to the Falcon end-zone.  Three plays later, the Cougars hopes of making a comeback seemed grim, with fourth and five near midfield.  Arguello took the snap from center and threw on target to receiver Mejia again; Mejia then quickly pitched the ball to running back Alderete who came running from the backfield. 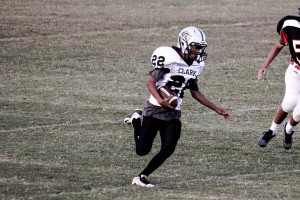 Alderete took the pitch wide around the right side of the defense and managed to advance the ball down the the 15 yard line before being dragged down from behind.  An errant snap on the following play was covered up by a blitzing Falcon linebacker, and the Cougar’s hopes of scoring were lost with the possession.  Stevens needed only one play to run out the remainder of the clock and seal the victory for the Falcons, 16-14.